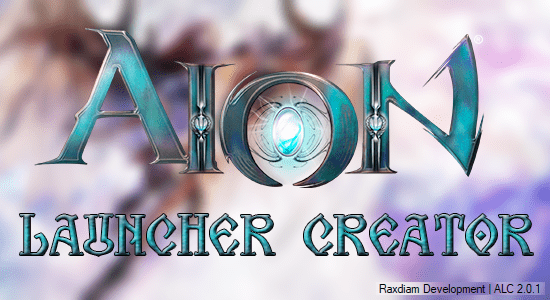 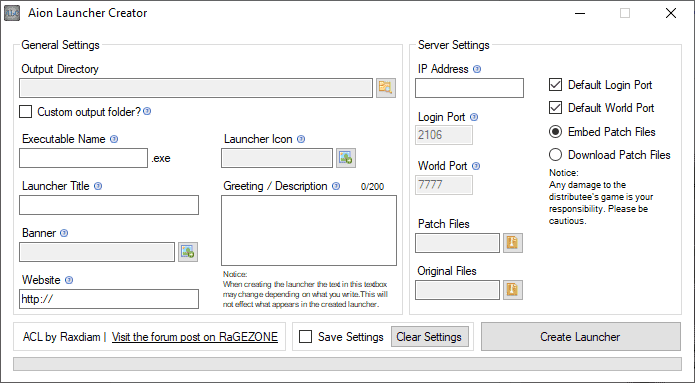 [Release] Aion Launcher Creator 2.0 - Create a custom launcher
Introduction
Aion Launcher Creator is an application with the aim to make it easier for those who own servers to create a launcher that will allow their players to join, and even patch their client with one that you create. You do not need any programming knowledge what so ever to create a launcher, all you need to do is fill out a few things and then you're ready to go!
Hopefully this will allow many more users to get their servers out there. Well, that's all for the intro.
Features
The Creator UI
I tried to create a simple UI that was easy to use. In future updates, the UI may be subject to change, and could eventually look completely different.
Client-Side Executable Generation
ALC will generated your launcher with the inputted settings. The launcher will be a single executable and will not require and external files as opposed to ALC 1.0's method of creation. - This was by far the biggest change.
Server Description/Greeting
Allows you to write a short description or greeting for your server. This will appear on your launcher.
Launcher Icon
Create and use a custom icon for your launcher. The icon will appear as the executable's icon, and the one in the title bar.
Launcher Title
Give your launcher a name, and it will appear at the title bar of the launcher.
Banner
Create a banner representing your server and show it off as the main graphic on your launcher.
Website Linking
If you have a website for your server, you can include that in the launcher by inputting the address in the given space.
IP Address
A necessary feature for a launcher. Input your server's IP address in the given space. Do not use a No-IP address.
Login and World Ports
Also a necessary feature. Provide the ports on which your server's IP address is using.
Embed Patch and Original Client Files
Create and embed your own patch files into your launcher. Remember to read the instructions on how to create and use patch files correctly.
Download Patch and Original Client Files
Create and provide download links to your patch files so that your launcher can download them when the user chooses to patch their client. Remember to read the instructions on how to create and use patch files correctly.
Change Language in Created Launcher
The user with your launcher is able to change the language to one that his game client is using.
Choose Client Path in Created Launcher
The user with your launcher is able to choose a custom path to their game client.
ALC and Created Launcher Progress Bars
Both ALC and the created launcher's UI provide a progress bar to let the user know where it is in what ever operation it may be doing.
Automatic Updater
When a new update is available, ALC will ask you if you would like to update it. It will automatically replace the old version with the new one.
How to Create and Use Patch Files
Using your own patch files for the Aion client is simple. All you have to do is the following:
Create a folder anywhere, and name it "Aion". This needs to be named Aion because the folder in which holds all other files of the client are also in a folder named "Aion".
Create the sub-directories. Patch files replace or sometimes add new files in Aion's file-system correct? Well, do make it so that the launcher knows where it's putting the files, you must re-create the directories in which the patch files will be going.
Zip up the newly created Aion folder. Name it anything you want. Ex. "customfiles.zip"
Repeat the above three steps, but with some minor changes. This time, you want to put the original client files into those directories. So that when the user of the launcher wants to unpatch their client, the custom files will be replaced with the original ones.
Zip up the original files' Aion folder and name it anything you want. Ex. "originalfiles.zip"
That's it. Make sure you do this right, because if you do it wrong, it will be your fault for messing up the users client. Not mine.